Here I am with my second post presenting the ambigram of the name "Manjula" I had made around the same time I had started with the hobby. The name is shared by my sister and an aunt of mine. I had made a sketch of it back then but had not taken a snapshot of it. I had forgotten the design and only recently did I sit down and try recollecting it on paper. I did, and instead of spending time making a sketch, I decided to re-create it, directly on GIMP.
Comments/feedback/suggestions are always welcome!

Okay, as some of you reading this might know, making ambigrams is my hobby and it has been so for about 5 years now (although with a hiatus). I don't really remember what exactly got me interested, but I do remember that I read Dan Brown's "Angels and Demons" after I had started making ambigrams. Maybe I had heard about the book and about the ambigrams earlier.
Before getting into ambigrams, I already had a fascination for making anagrams (largely due to playing the daily scramble on Deccan Herald) and I used to scribble and make anagrams on the last pages of my note books during my final year as an undergrad. So, for ambigrams too, I used the same "workspace" and when it came to making a good ambigram, the most boring lecture hours were my most productive ones. Anyways, the first ambigram I made, was of (no prizes for guessing it right) my own first name! It came out pretty good for a first attempt and I immediately drew it on my favorite jeans -- light blue jeans on which I had scribbled things like the Yin-Yang, the peace symbol, etc., and on which my friend wrote my girlfriend's name in "encrypted format"...;).
After that successful first attempt, I was hooked! I made quite a few ambigrams and symbiotograms, all on the last pages of my notebooks, but never thought I should document them (reminds me of some actor giving a talk during which he says, "We Indians are bad at documenting."). But because of my good/bad habit of not discarding most of my past stuff (even if they are practically useless and in bad shape), those ambigrams are still present in those notebooks back at my place in Dharwad, though I have not had a chance to check them out for years. Very recently, I revived this hobby of mine and started making ambigrams again and started reproducing as many of my old ambigrams as I could. So, here's the first ambigram I ever made. I like the way it was so simple, and kind of obvious. 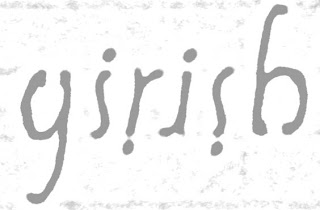 So, for months now I have been at making ambigrams of my friends' names and saving them. The usual procedure I followed was to sketch the whole ambigram on a white page, take a picture, upload it to my computer and edit it using Photoshop. Now, editing simply involved adjusting the brightness/contrast and applying some texture or some noise so that irregularities in the sketch would be camouflaged. I did the same for all my ambigrams. Though I longed to be able to draw them directly in a graphics editor, I hadn't sat down to try it because I just couldn't (and still can't) draw using a mouse, leave alone drawing using my laptop's touchpad - my hand gets jittery.
That was, until recently, when I was checking out all my ambigrams. I saw how crude they all looked. I decided that it was about time I get "digital" with them, and thanks to my memory, I remembered something I had read about a year back - Bezier curves, and they made life so damn easy for me! My first ambigram has now been fully done using a graphics editor (I used GIMP but even Photoshop could be used) and while I was at it, I made a couple of modifications to the design too and added a Gif animation so that people wouldn't have to tilt their heads to check out the rotational symmetry. I still have lots to learn and experiment, though. I will be posting more ambigrams as I make them. Of course, I would love to hear your comments and suggestions!